The water around the Canaries is warmed by the Gulf Stream flowing down from the north.  Temperature ranges from 19⁰C in February and March through to 24⁰C in September and October.  We have rental wetsuits with 5mm and 7mm thickness, and for those who really feel the cold when diving – we have shorties which can be worn in combination with these. For guests bringing their own suits, we recommend 5mm suits towards the end of summer, and 7mm or semi-dry suits throughout the rest of the year.

The waters of the Canary Islands produce relatively little plankton (which reduces underwater visibility) making them some of the clearest waters in the world, with visibility often exceeding 30 metres. Spring is the only time when the visibility diminishes a little, as this is when vegetable plankton (phytoplankton) flourishes.

Currents are sometimes encountered on our dives, although they are rarely particularly strong.

The currents which affect our dives sites are long-shore currents – currents which run parallel to the coast.  The direction depends on the tide cycle meaning that it changes depending on whether the tide is rising or falling. Currents are often experienced when diving close to headlands, drop-offs or sea-mounts, but they are usually fairly weak and non-existent at slack tides. Our tides are oceanic, with two high and two low tides each day.  The maximum tidal range is 2.7 metres, experienced during the spring and neap tides of February and September.

This is the most common of the 5 different species of turtle which frequent the waters around Tenerife.  Green turtles can grow to over 1 metre in length and can weigh up to 200 Kg. 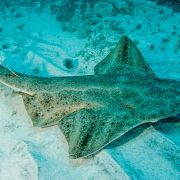 The shark we see most often when diving; the Angel shark is an ambush predator, lying motionless half-buried in the sand waiting for prey to swim close enough for a sneak attack.

Globally this is a species under significant threat, but luckily here in Tenerife the population is such that sightings are quite common – primarily during the winter months. 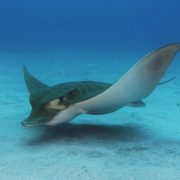 At first glance this stingray looks very similar to an Eagle ray, although it can grow to over 150 cm across, and has tiger-like marking across its back.

It is usually spotted swimming a few metres above the sand. 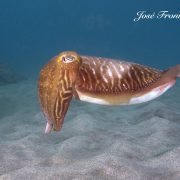 We are lucky that these fascinating creatures are abundant in our waters.

Like their cousin – the octopus – cuttlefish are masters of disguise, able to change their colour and texture immediately to match their surroundings. 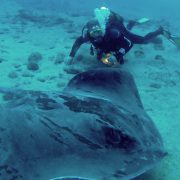 An impressive sight to behold, these round stingrays can grow well over 1 metre across.  During their mating season it is not uncommon to see them in groups of ten or more, often piled on top of each other.

They are not at all afraid of divers and often come nice and close to check us out and pose for photos.

Check out our Photo Gallery for more
Check Prices for Diving

If you have any questions, you can reach us through one of the following methods: