You don’t see that every day!

Here in Tenerife, we are blessed with great conditions for diving, and fantastic variety of marine life. Having said that, some of the creatures we can find in our waters are more common than others…

One fish which we practically NEVER see is the Frogfish! Personally, I have made thousands of dives in the waters around Tenerife and I have never spotted one of these illusive little creatures here.

So imagine how thrilling it was when Greg returned from a dive the other day, not only claiming to have found a Frogfish, but providing photographic proof! (after all: it didn’t happen if you don’t have a photo to prove it, right?)… So, for all you non-believers: 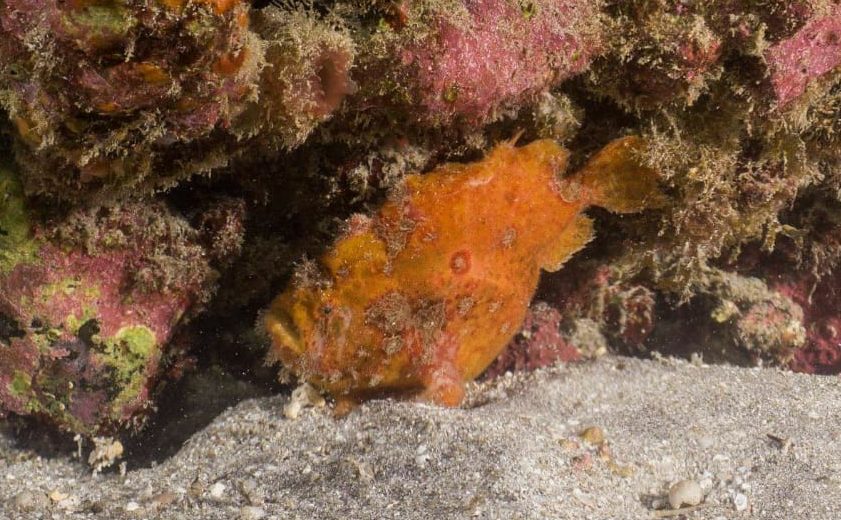 Yeah, great, but… what on Earth is it?

Frogfish are generally considered to be a pretty elusive species, no matter where in the world you are. Of course, in some areas they are more common than in others, but even when they are prolific, they are often so well camouflaged that finding them is no easy feat. Most commonly they appear to resemble sponges, but encourage other organisms to grow on them as well, as can be seen from the patches of algae dotted around the fish in the photo above.

They can actually be found in almost every sea on Earth – the big notable exception being the Mediterranean. They are a species of Anglerfish, which often use a lure to entice their prey to swim around in front of their mouths.

They are not nimble fish – they have evolved to camouflage from their prey and, over time, have lost many of the features which we associate with fish! They have no scales on their skin; they have a very high back and aren’t remotely streamlined for efficient swimming. Their pectoral fins resemble arms more that anything else, and they use these fins both to walk along the sea-floor, and support themselves once they find an appropriate place to perch.

When extra propulsion is required, they take in water through their mouths and expel it through jet-like valves located behind their pectoral fins. This gives them a small bust of movement, but ultimately these fish are unable to move in a hurry.

When they do manage to attract some prey to swim in front of them, their attack is ferocious considering their inability to move quickly. They open their huge, cavernous mouths so quickly that the suction created draws in so much water that anything swimming in the catch-zone doesn’t stand a chance to escape.

This method allows them to enlarge their mouth cavity by up to 12 times it’s normal size, and this can happen in as little as 6 milliseconds! Extra water drawn in through this maneuver is expelled through their gill openings. The pray, once swallowed, is trapped behind their esophagus, which quickly closes shut completely.

So there you have it. A very special find for us, but for sure we’ll be keeping our eyes peeled for more! When are you coming out to help us on the hunt?